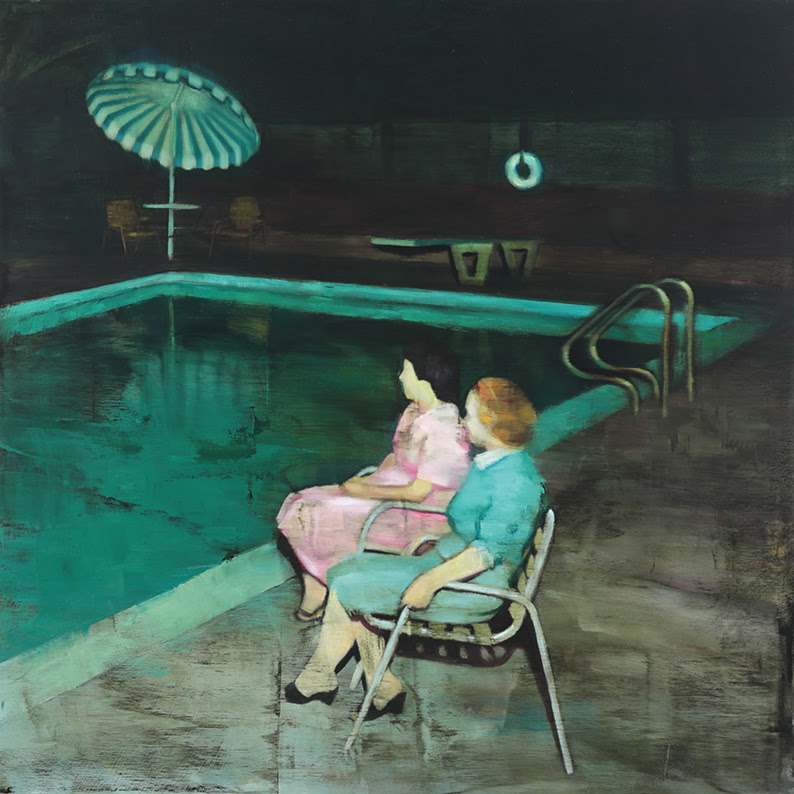 THE ONLOOKERS
The works of Andrew Beck seem to show snapshots of romantic tone that locate themselves in a dystopic and bygone era. His work evokes uncertainty — which may be the fruit of his arrangement of people and objects, often in contradiction of the laws of physics, but may equally reflect the viewer’s sense that some fascinating and unheard-of event is unfolding just beyond the pictorial surface. Beck inserts disquieting elements into the familiar and unthreatening. People and objects seem to merge or to partially disappear from the space — both tending to alienate the viewer from the usual assumptions of naturalistic representation. Is the work reality, a dream, or the pure inner world of the artist? There is no answer. The best the viewer can do is to muster his own imagination and narrative arc to interpret, and thereby unify, the picture. In this way, the viewer merges with the work, becomes, in a significant way, part of it. This completion of the picture comes only through what the viewer and his or her consciousness imports

ARTIST STATEMENT
“My recent paintings invite the viewer to be an onlooker, a witness to lost moments and half remembered dreams. Like
beginning a movie part way through, we’re unsure of what’s happened and must watch and wait to see how events unfold
before trying to piece together the full story for ourselves.” A. BECK

BIOGRAPHY
Born in England, Andrew Beck now lives and works in Ottawa, Canada. His passion for drawing and painting goes back as
far as he can remember; this early enthusiasm for visual art has continued throughout his life. After gaining a degree in
graphic design, Andrew built a successful career in that field but the urge to paint remained. He continued to develop as an
artist, finally becoming full-time after emigrating to Canada in 2016. Andrew’s paintings have been exhibited in galleries
throughout the UK, Germany and Canada and are featured in private and public collections in the UK and US.